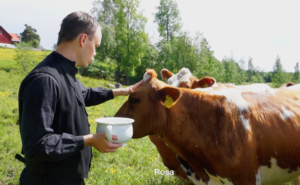 Synopsis As a, not demanded, supplementary examination to the application for the University of Theology, Jan Jansson orders this video. His aim is to show the admissions office at the University that he is the perfect “priest to be” in spite of his poor grades. He does this through a brief presentation and a rather bizarre ritual.

“To become a Priest” was written and directed by me (Karl Sterner) and starred by Johan Stenvall. It was filmed in 2015 and screened at festivals around Europe in 2016 and 2017. It is also part of a larger project, where eight short films with the same theme and mockumentary approach will be merged into either a web series or a feature film with the Swedish title “
Vi vill också vara med”, English title; “We also want to play”.