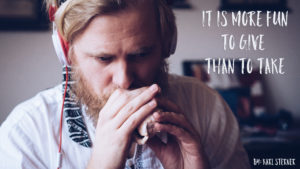 Synopsis; Felix, a young man in his best years, is stuck working on his bachelor thesis which deals with the delicate topic of stress management. His aim is to make the best relaxation tape the world has ever seen. He’s adding layers of “small sounds” and has been doing so for five years but can’t seem to finish. His girlfriend has finally left him and Felix believes that she did so because of his high level of ambition and dedication to his work. The problems are gathering up and now when his economic situation is getting critical he hires a film team to show how rigorous and ambitious he is in order to convince CSN (the Swedish National Board of Student Aid) to prolong their grants instead of demanding pay back for old loans.

But instead of convincing anyone the film portraits his very own little treadmill where he is pacing around lost in his own world.

“It is more fun to give than to take” was written and directed by me (Karl Sterner), filmed by Fredrik Lotto and starred by Lucas Gren. It had its premiere on the 26th of August 2018 at The High Coast International Film Festival.

The film is part of a larger project, where eight short films with the same theme and mockumentary approach will be merged into either a web series or a feature film with the Swedish title Vi vill också vara med, English title; We also want to play.